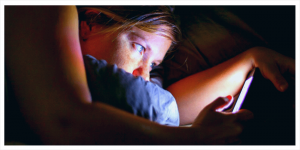 It’s undeniable that there have been some major advancements in technology, but are we over exposing ourselves?

Have you ever been on your phone or computer for a long period of time resulting in a headache? Headaches can be caused by many factors; dehydration, misalignment in the spine, poor posture, and some studies show, sleeping by a cell phone. The effects of constant use of mobile devices are still being tested. However, there are a few things to be aware of and modify for long term health.

Does my phone carry RADIATION? –

“After using your phone for a long time, or sitting on the couch with your laptop on your lap, you’ve probably noticed how hot your device gets. Yes, part of that is from your own body heat, but primarily that is due to the non-ionizing radiation from your phone converting to thermal energy. This should be your real concern because thermal energy actually can cause DNA changes and tissue damage more than the actual radiation can.” (theheartysoul.com)

Why shouldn’t I sleep next to my phone? –

BLUE LIGHT caused by; TV’s, cell phones, computers and other devices, disrupt levels of melatonin and cortisol in your body, making a “good night’s sleep” more difficult and disrupts the REM cycle. Lack of sleep suppresses the immune system and makes the body sluggish and more vulnerable to illness. Technology can over heat, so placing a phone under a pillow or on the bed is a fire hazard. According to Time.com, too much radiation close to your head can cause headaches, ringing in the ear and other heath issues.
The best sleep is in a dark room. Switch from using your phone as an alarm to a plug in alarm clock. This will minimize the blue light exposure along with the radiation. Store your phone a few feet away from where you sleep. The more distance between you and your phone the better.

California Department of Public Health did a study that shows 95% of Americans own a cell phone and teens especially need to use with caution since they will be exposed to more RF energy over their lifetime than people who started using cell phone as adults. The more you do these simple changes, the better off you’ll be.